A Driscoll Pulmonology patient’s artwork is being used to educate others about the importance of children having healthy lungs.

Giovanni Saenz, 9, who has asthma, painted two lungs: one that is healthy and smiling and one that is grimacing and coughing.

Both lungs are displayed in the Pulmonology clinic at Driscoll Children’s Hospital. The artwork is a talking point for other pulmonology patients and parents.

Jon Roberts, MD, Director of Pediatric Pulmonology at Driscoll Children’s Hospital, is proud to have Giovanni’s artwork hanging in his clinic.

“I have been taking care of Gio since he was a small wheezing toddler. I am amazed at how much he has grown, both in size, and as a person. And I had no idea how talented he was as an artist! He is such a great kid,” said Dr. Roberts. 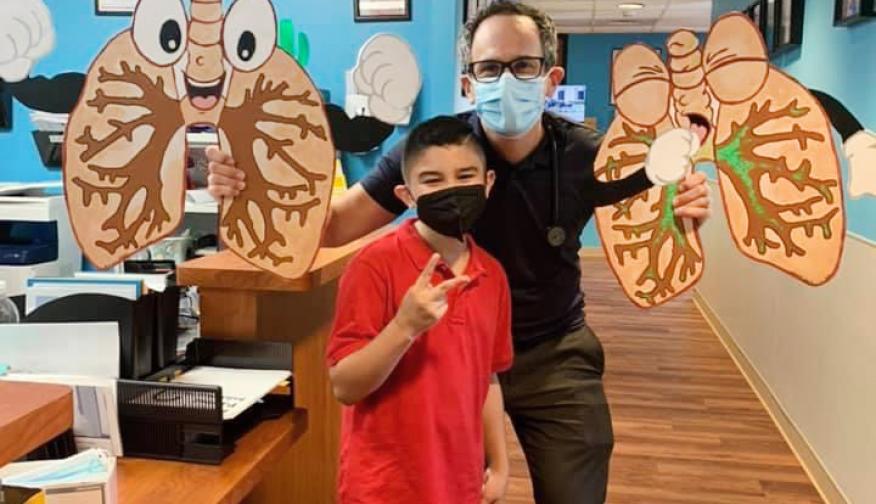 Giovanni Saenz, 9, and Jon Roberts, MD, Director of Pediatric Pulmonology at Driscoll Children’s Hospital, want to educate everyone about the importance of having healthy lungs.

For Giovanni, the trip to talented, young artist was a long, arduous one.

At the age of two, Giovanni stopped talking. After being diagnosed with autism, and with the help of physicians and therapists, Giovanni now talks, has upper body strength and is working on lots more milestones.

Two years ago, Giovanni’s grandmother passed away and school life and everyday things became overwhelming for him. In trying to deal with her son’s struggles, Giovanni’s mother Reena Saenz gave him some paints, brushes and a sheet of plywood.

Reena was amazed at what Giovanni did.

“That day, after seeing his beautiful work, I realized Giovanni had a gift. This kid could paint exactly like a picture. Since then, he has made his grandmother’s plot the most beautiful one every holiday,” said Reena.

“When his best pal Dr. Roberts asked for lungs, Giovanni made it his top priority and surprised him with beautiful work that now is displayed in the Pulmonary Department,” she said. “Painting for Giovanni is a way for him to calm down, to cope. It’s his self-regulating station, it’s his safe zone and it’s his beautiful imaginary world.”